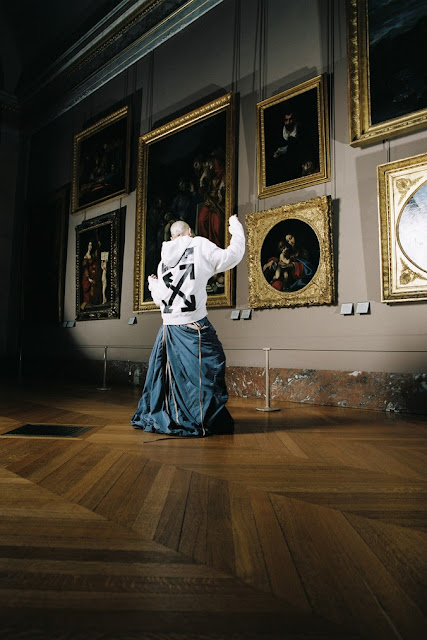 Off-White is back with another curious collab.

The Musée du Louvre, Paris’s (and arguably the world’s) most famous museum, is currently holding a broad exhibition dedicated to Leonardo da Vinci. The artist, inventor, and genius died just over 500 years ago, on May 2, 1519.
The Louvre show—which opened on October 24, 2019 and will run until February 24, 2020—took approximately 10 years to produce. It features over 160 works, including the 5 da Vinci paintings and 22 da Vinci drawings the museum holds in its permanent collection. Other pieces are on loan from establishments in the United States, Italy, Russia and more. It sees approximately 7,000 visitors per day. Such is the fame and the pull of the da Vinci mystique.

An unexpected complement will soon be introduced to the fanfare, allowing for callers to pick-up a simultaneously modern yet anachronistic souvenir: a collaboration between Off-White, from Virgil Abloh, and the museum.
The link-up will feature t-shirts and hoodies with graphics enmeshing Off-White's iconography and select da Vinci works, including Virgin of the Rocks and anatomical sketches of the male body. The collection will be available at the Louvre gift shop and through various points-of-sale, with prices ranging from $355 to $640.
The idea of a centuries-spanning temporal clash is interesting, and has echoes of other imaginative waves in which contemporary creatives have looked to classical styles (John Currin’s porn series, Walton Ford’s neo-naturalist paintings, et al).

Fashion designers, too, have time-traveled backward: for Spring 2013 at Givenchy, Riccardo Tisci reworked olden Catholic imagery, screening it, for example, on silk-paneled sweatshirts. Dolce & Gabbana also dives deep into history to help bolster its motifs. In fact, the company just introduced a new watch inspired by a da Vinci sketch of a tower clock.

This new partnership is also intelligent to the degree that, for audiences unaware of or uninterested in da Vinci, a collaboration with Off-White is a (somewhat unorthodox) way to market the late pioneer. No doubt there are some in the younger generation who know of Virgil, but who may not know of da Vinci.

The two do have a major shared focus: a voraciousness for multidisciplinary thinking and learning.

“You can be interested in expressing yourself through more than one practice… creativity does not have to be tied to just one discipline. I think that Leonardo da Vinci was maybe the first artist to live by that principle, and I am trying to as well,” said Abloh in a statement.
"cara delevigne"
Off-White x da Vinci: A New Collaboration Drops in Paris