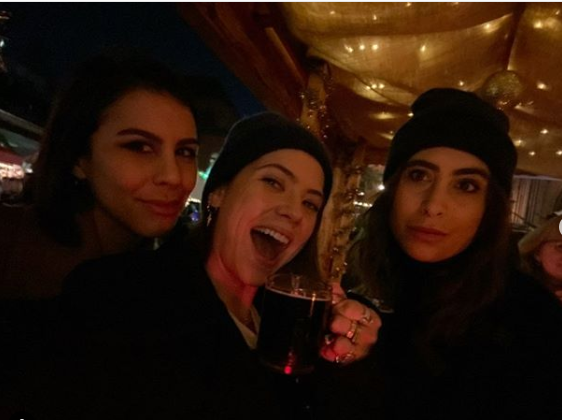 Ashley Benson is setting the record straight after rumors surfaced that she and her girlfriend Cara Delevingne had split. On Tuesday, just one day after Delevingne had tweeted and then deleted a post suggesting they had gone their separate ways, the Pretty Little Liars star shared a new post to Instagram of herself and friends in Germany, immediately prompting fans to question where Delevigne was.

"Did you break up with cara?" one fan asked in the comments section of the post.

Benson was quick to respond, putting the rumors to rest with a simple, "nope."

Breakup rumors were sparked late Monday evening after Delevingne’s Twitter account shared a tweet at 9:40 p.m. stating, "Me and Ashley broke up." Roughly 20 minutes later, the tweet was deleted, though worry had already sparked among the couples’ fans.

As it turns out, it seems that the tweet was the result of a hacker, as beginning at 9:30 p.m. that night, the actress’ account rapidly fired off multiple posts, including a fake iPhone giveaway, a link asking for donations to be made to a Venmo page, and a tweet that read, "I think I’m turning straight."

Still, concern over the status of the couple’s relationship is looming. On Thursday, Dec. 12, Benson again took to Instagram to show off her 30th birthday celebrations.

"London nights," the actress captioned a gallery of images, in which Delevingne was again absent.

In the comments section, when person asked, "where’s Cara," prompting Benson to reply back with "she has a job," according to Us Weekly.

Benson and Delevingne were first linked in August of 2018 after they were spotted kissing at London's Heathrow Airport. Despite the show of PDA, the couple kept their relationship a secret until June of this year, when Delevingne confirmed they were dating ahead of the TrevorLIVE Gala.

0
COMMENTS
"I don’t know because it is Pride, it’s been 50 years since Stonewall happened and I don’t know," she told E! News of her decision to share a video to social media of herself and Benson kissing. "It’s been just about our one-year anniversary so, why not?"

Although they still prefer to keep their relationship private, sources confirmed that they moved in together over the summer, and they have even been at the center of engagement rumors.

WAIT! Subscribe to GroupChat, PopCulture.com's official Reality TV podcast! Check it out by clicking here or listen below.